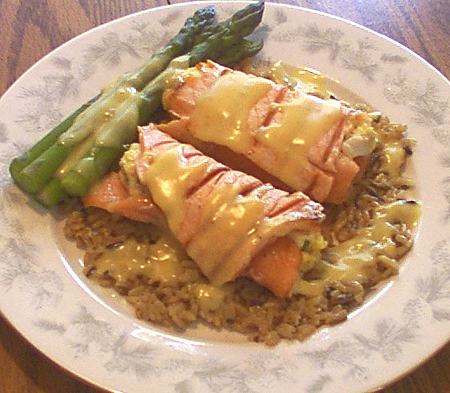 This picture is from June 2006 when I first developed this dish. The camera I used was an original
circa 2000 Kodak DC3200, with its 1.2 megapixel CCD sensor and an additional 256M flash card.
While the camera still works and is sitting right behind me, we’ve been using duct tape to keep
the battery compartment closed for some time now.

When I posted that image yesterday of the new bar at the Frog Leg Inn, it dawned on me I hadn’t blogged since last weekend. We had lots of good food around here this week, from some freshly-cut pork tenderloin medallions wrapped in bacon, to another necessary and massive batch of chicken noodle soup.

Really though, nothing to write about.

So, a couple years back at a local restaurant, I ended up choking down a fish dish.

I like fish. Really, truly enjoy the stuff. Yesterday on The Great Canadian Food Show Carlo Rota had this Salmon Tartare that looked for all intents and purposes like Cat Vomit On a Plate. The chef at the restaurant in Montreal had chopped raw salmon fairly small, made up a fresh mayonnaise with was slightly yellow, mixed it with capers, dill and chopped shallots, and then added the pink salmon.

I’ve cleaned stuff that looks like that off the couch.

But still … what was on that plate … yeah, I’d have eaten that, even though it looked the way it did. Fer sure. At least it wasn’t warm …

A few years back this one couple, some of our best friends, gave us a gift certificate from a local restaurant. I saw on the Specials board they were serving a Lobster-Stuffed Whitefish. Now I don’t care too much for lobster myself. To me, lobster is just an expensive way to eat butter. I’d much rather have my butter on an English muffin with a nice glob of orange marmalade on top, heavy on the orange zest.

The Lobster-Stuffed Whitefish sounded interesting. Who’d have thought to take a salt-water crustacean and embed the stuff into a light-and-fluffy freshwater fish? Would it end up being the seafood equivalent of a Fig Newton?

Er … no, it wasn’t the “seafood equivalent of a Fig Newton”. It was … interesting? No … Different? Definitely. A pleasant combination of contrasting flavors toying with my taste buds?

It was closer to … gross.

The lobster had apparently been folded into a sage stuffing intended for the Thanksgiving turkey, with about twice as much sage as was needed. I could only taste either of the types of seafood by doing some fishing with my fork and pulling out individual chunks. Otherwise, all I had was a mouthful of sage.

My mind wandered. Man, what I wouldn’ give for a decent hunk of salmo …

Wai … what? What was that? Salmon? Yeah, that would work here. Get rid of that lobster stuff … But salmon’s heavier than whitefish. Put the salmon on the outside, whitefish on the in … sage? No, not sage stuffing. Cornbread stuffing, yeah that’s it. Nice and swee … binder, need a binde … the asparaus is a nice touch, goes good with Hollanda … Hollandaise?? Make the cornbread, cook the whitefish, combine the two with Hollandaise, stuff it into the salmon, and grill the whole of it …

When I made this Whitefish-Stuffed Salmon a couple days later, even Mary-who-doesn’t-like-seafood really liked it.

This is really the first dish I ever created on my own that worked as well as I’d hoped. It’s a nice comfort food for a cold winter day, and is the kind of thing you can prep in advance up till the point of the final grilling, and make a party of.

Deep Prep: Making The Cornbread (the day or morning before)

Sift the flour, then measure out the required amount. Add the baking powder, salt and sugar and sift the mixture. Add the corn meal and mix it thoroughly.

In a separate bowl, combine the beaten eggs, milk and melted butter. Add the liquid to the dry ingredients, and mix it only till the dry ingredients are moistened. Dump into a greased 9 x 13 pan, and cook at 425 degrees for 40 minutes.

Place the whitefish in a buttered baking dish. Brush with melted unsalted butter and season with salt and pepper. Bake the whitefish in a preheated 425°F oven until the flesh is opaque but still moist, about 10 minutes per inch of thickness. Let the fish cool, then coarsely flake it. You should end up with about 2 cups of flaked whitefish.

In a pan, mix the flaked whitefish with the crumbled cornbread. Add only half of the Hollandaise sauce and the fresh thyme and chopped chives. Set this pan over warm heat and let the stuffing mixture heat through.

The salmon should be approximately 3″ x 6″, sliced about 1/8″ thick. Spoon a few full tablespoons of the stuffing mixture onto one end of the salmon slice, and roll up the salmon around the stuffing.

Serve over a bed of cooked wild rice, garnished with whole stalks of fresh blanched asparagus and a bit more of the warm Hollandaise sauce.

Notes:
• Any cornbread recipe will work for this. If you have your own favorite, feel free to use it instead.
• Don’t care to make cornbread from scratch? Using a box of Jiffy cornbread muffin mix from the Chelsea Milling Company in Chelsea, Michigan, works just as well.
• We don’t include the recipe for Hollandaise sauce here. It’s listed in plenty of cookbooks but can be a bit on the difficult side. However, if you’d like to make it from scratch, go right ahead.
• Like a bit more of a corn flavor? You could easily thicken the cornbread/whitefish mixture with a bit of thick creamed corn for a very interesting result.
• You can also use pre-sliced smoked salmon for this dish. The type of smoking used will certainly modify the flavor. As the rest of the dish is a bit on the sweet side, a nice rich hickory-smoked salmon would work well.