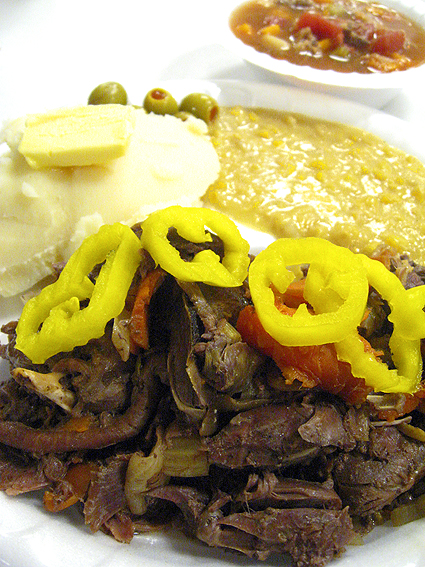 In a nutshell: This dinner, a Muskrat Dinner served at Erie VFW Post 3295 yesterday evening, was far nicer, far tastier, far more satisfying than I had imagined it would be. There was no “gaminess” to the meal I ate, which you can see in the above photo. Mary said she had one bite that tasted “off”. Other than that, we cleaned our plates.

Imagine a good roast beef, rich and flavorful, so tender it falls apart, cooked with strips of bacon and some carrots and onions for extra flavor. Add tiny annoying bones that you have to keep fishing out of your mouth no matter how careful you are, plus a couple textural surprises on occasion that aren’t difficult to deal with. Top with banana peppers, serve with smooth mashed taters, creamed corn … and freshly made turtle soup, complete with okra. 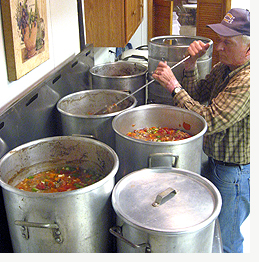 Back on January 10th I’d posted some of the history of Muskrat Dinners in southeastern Michigan. I’d also lamented the fact that there wdidn’t seem to be a decent photo of a completed plating of such a dinner. Tickets in-hand for the evening event, yesterday afternoon I called Erie VFW Post 3295. I did my best to explain who I was, and asked if Mary and I could get there early to get some photos of the proceedings. Looking at their web site I’d already missed one opportunity; They’d cleaned the muskrats (“rats” for short) Thursday morning. I’m sure that would have been a great photo op. The fact is, I really believe it would have been a wonderful video opportunity as well. But yeah, I’d missed it. Maybe next year I can pick up the slack on that one. 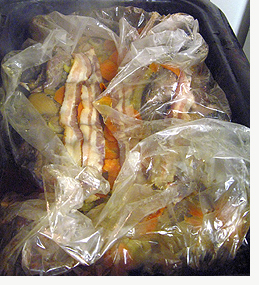 When we arrived yesterday we found Mike Denko feverishly working on some serious soup where pot-after-pot of freshly-made Turtle Soup was going through its final preparations on a massive commercial cooktop. Spread throughout the Post’s kitchen and into the large dining area, there were also 15 roasters, the same type of roaster you use at home for cooking your turkey on Thanksgiving. Each of these roasters was lined with the same kind of cooking bag you cook that turkey in. Along with the carrots, onions and bacon, each of the 15 roasters contained approximately 19 muskrats. (The Post had ordered 300 rats for yesterday evening’s event but had only received approximately 280.) The wonderful smell of the umpteen gallons of turtle soup, combined with the pleasant whiffs we were getting from all those simmering roasters … we became hungry long before it was time for the kitchen crew to begin serving the meal. 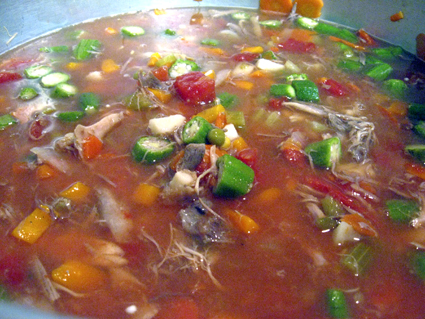 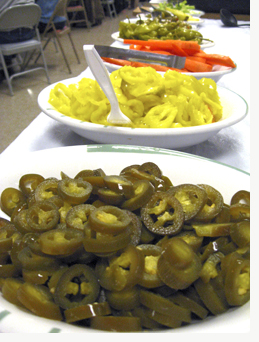 As this was the 53rd Annual Muskrat Dinner at Erie VFW Post 3295, they had the whole of it down to a science. There was no guesswork; Everyone knew what they had to do, where everything needed to go, what needed to be where. I’d have never thought to put out various peppers, green olives and other condiments to garnish the muskrat with. But there they were, a line of bowls on the serving line, each one a photo of its own. This gang makes muskrat look good! There was another table (one I didn’t get a photo of) lined with a large assortment of breads. I couldn’t quite figure out what this was for until later, when I realized some diners were making muskrat sandwiches. I’m not sure how that would have worked out for me, not with all those little bones throughout the meat … The far end of this bread table held boxes of various kinds of crackers, just prior to where a couple gents were serving steaming bowls of that absolutely wonderful turtle soup. 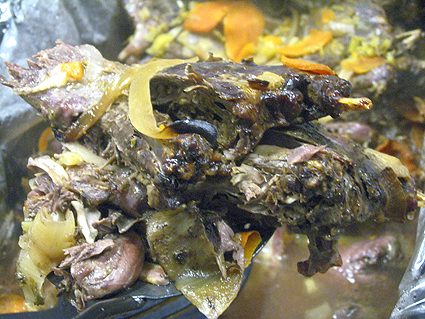 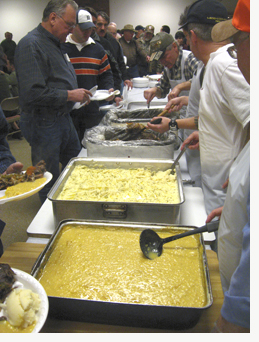 Looking at the above photo of a spatula of juicy muskrat simply falling off those bones … you kind of get a feeling for the few gals who were there who bypassed these roasters altogether, heading straight for the mashed potatoes and turtle soup. Mary had also mentiones she’d go for the soup. She’d had muskrat once before and didn’t really care for it. However, last night she did take a spatula full of muskrat, finding it to be so good she actually cleaned her plate better than I did mine! I wasn’t even able to finish my bowl of turtle soup … I guess having the 1/2 lb burger at lunch at the Bolles Harbor Café (see previous post) wasn’t exactly a good idea when considering what our dinner plans already were. Fortunately, the gang at the Post had thought of that; My turtle soup went into a soup-size to-go container. It’s in the fridge so I can warm it in a small pot and happily enjoy it for lunch today.

As Mary put it, “Lots of older guys over 40 in flannel shirts and ball caps, with older ones in dress pants.” Look at the below photo. You can see Mary toward the center, surrounded by just more than a couple hundred men. We counted eight women in attendance altogether.

Gals, this stuff is seriously good. We’ll be back next year to this group’s 54th Annual Muskrat Dinner, and maybe a couple other local ones as well.

After yesterday evening’s amazing dinner and great cameraderie, we feel it’s worth it. We hope to see more people, especially women, at more of these Muskrat Dinners. 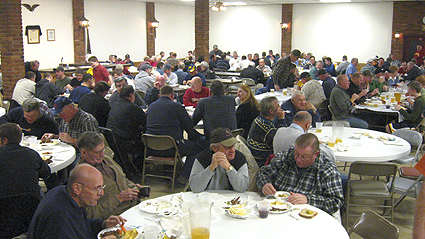