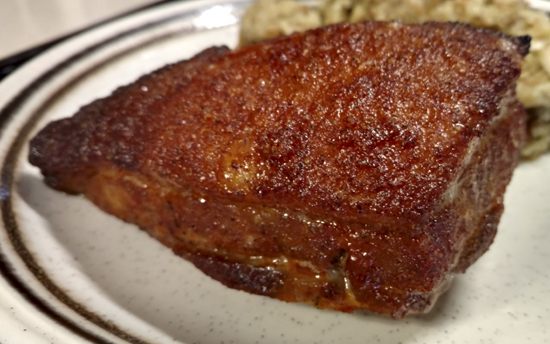 Oven-Roasted Pork Belly at our house. The recipe is below.

Back when I was a kid, when all the good radio stations were still on the AM band, dad would listen to the Farm Report. Well, he had it on in the mornings, and he may not have been listening to it while he was only waiting for the Polka Hour from Frankenmuth to start for the morning. But there it was nonetheless. Dad came from a family of German-Russian farmers, and had partly grown up on farms in the area surrounding Alpena, Michigan. The family farm, with its outhouse and old red barn, had been located in Hubbard Lake, a place I have fond memories of.

I understood the majority of the Farm Report when dad would have it on. We played an old card game called “Pit”, which had been originally released by Parker Brothers’ in 1904. The game basically duplicates what occurs at agricultural auctions, and you end up getting the “corners on” barley, oats, wheat, corn and the like. The game is now available again, and we do have a newer edition of it.

But the game doesn’t cover other types of markets. So the concept of “pork belly futures” didn’t make any sense to me for quite some time. I couldn’t fathom why anyone would be interested in such a thing.

It wasn’t until I entered the restaurant industry in the spring of 1979 that I learned what many people who eat pork don’t understand themselves:

Pork belly is the cut of pork that streaky, side or slab bacon is made from, which is what most Americans who eat bacon enjoy. It’s also used to make salt pork, which is popular for many uses.

And yet, the inevitable occurs … Squeamish Americans will hear the term “pork belly” and immediately ask “How can you eat something that’s gross? Eating a fat pig’s belly?? Ew!!!” When asked if they eat bacon and they say yes, I give the explanation. “But eating just the belly … That’s nasty. I’d never do that.”

I end up shaking my head almost every time.

Throughout history, in many cultures, eating pork belly in its many preparations has been quite a normal occurrence. Nose-to-tail eating has been prevalent since the dawn of time, and it’s only been in about the past century or so that people in western cultures, particularly the U.S., have seen fit to be so elitist as to find it unappealing. So-called “adventurous eating” is now a “trend”, and people now search out “nose-to-tail”, “farm-to-table”, and other such establishments in an effort to follow that trend, to be part of that clique, to eat “organically” as part of that clique.

The truth is, that’s how people have always eaten. It’s not just a current “trend” to be part of. Pork Belly is a staple in many cultures outside the U.S, particularly eastern and Mediterranean cultures. 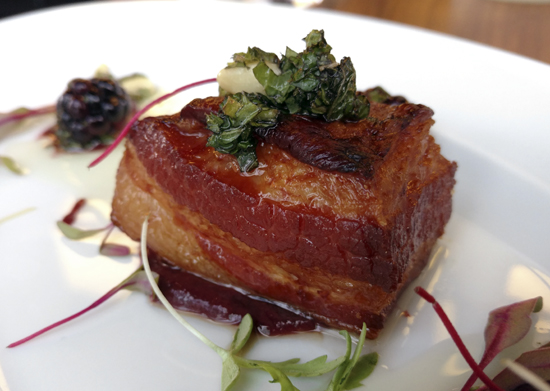 Pork Belly served as a respected ingredient in an unpretentious Starter in a restaurant setting, from Chef Aaron Lawson at Brim House, Toledo, Ohio, September 25, 2017.

Fortunately though, pork belly on its own is making a comeback as part of these “trends”. Pork belly as part of a ramen dish is astonishingly simple, while cured and slow-roasted variations are popping up on many menus. I first ran into this in about 2009 when I’d notice a half-pound pork belly sandwich on a local burger joint menu. The pork belly was given a rub, slow-roasted under extremely low heat, and then seared to order. To say it was a joy to eat this buttery gem is an understatement.

I saw it a few times afterward on other menus as well, but it wasn’t until the summer of 2015 that I felt the time was right to experiment with it. I’d spotted it on my supplier’s ordering site at a cost of $2.49/lb for a case of three sections of approximately 8.5lb each, and as the Father’s Day buffet was approaching I felt we could have some fun without too much expense. 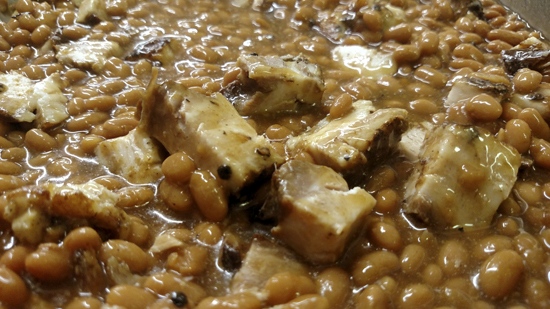 The Pork Belly & Beans at the Father’s Day Buffet it the Skyroom at the Indiana Beach Amusement Park in 2015. The recipe and other photos are below.

Chef James and I decided we’d go for a pseudo-artisanal Pork & Beans for one of the buffet dishes. The baked beans themselves would be Bush’s Original straight from the can, which most dad’s really enjoy. But the pork was where we’d get a little more creative.

I thawed down one of the belly sections and cut cross-hatched slits in the fatty side. I then made a simple brown sugar rub with salt, peppercorns, granulated garlic and a few other spices. Once rubbed, we let it sit in the cooler overnight. After searing all six sides on the flattop, we then got some cheap beer from the barkeep, mixed it 50/50 with chicken stock, and let it sit in a 350-degree oven for three-and-a-half hours. At one point someone checked the temp and told us it was done, but we’d understood leaving it the whole time was best. We only needed to replace any evaporated liquid with either chicken stock or beer, it didn’t matter which. We just made sure to keep it covered with liquid. We then pulled it from the oven and let it rest before cutting it into half-inch cubes to toss with the baked beans.

The result blew everyone away. We just stood there eating the stuff, tossing back the buttery, pillowy cubes of fatty goodness like they were pieces of popcorn at a movie. I had to make the staff stop eating them so we’d have enough for the Pork & Beans. 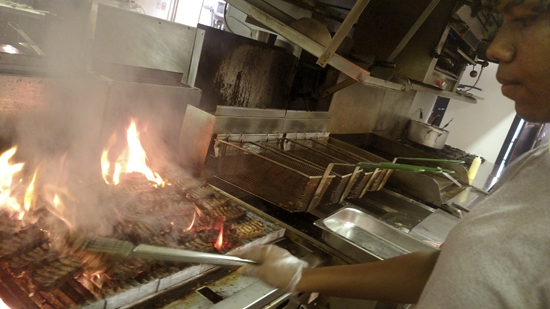 Chef Janelle in the Skyroom kitchen grilling up her Jamaican Jerk Pork Belly for sandwiches on the buffet in 2015.

We did another batch of Pork & Beans at a later date, the same way, and it was again a popular offering. A few weeks later Chef Jenelle, from Jamaica, asked me in her beautiful Jamaican accent if there was any pork belly left. There was one more chunk, and I gladly let her have it. She mixed up her grandmother’s Jamaican Jerk seasoning, rubbed the belly with it and let it marinate in the cooler overnight. The next day, she cut it in half lengthwise, then each half into ¼” chunks. She then grilled the pieces and put them on the buffet alongside hoagie rolls, tomato slices and shredded lettuce for sandwiches. 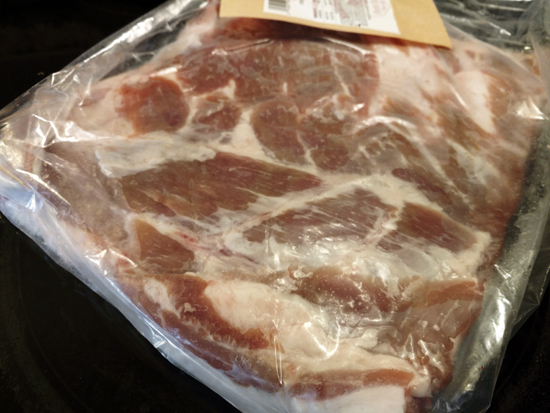 One of my many hunks of raw pork belly from Stanley’s Market in Toledo, Ohio.

I’ve been able to play around with pork belly since. The most I’ve paid for it so far is $3.29/lb, the same day another butcher in Toledo was asking $5.29/lb for the same cut. It would seem that particular butcher was falling for the “trend” surrounding pork belly and nose-to-tail in general, and possibly escalated their price accordingly. The $3.19 price was at Stanley’s Market, a venerable Polish butcher shop and bakery that Mary’s parents shopped at while she was growing up. Stanley’s is the kind of place to seek out when looking for real food at reasonable prices.

(I do have to mention though that the same large cuts of pork belly we used at the Skyroom are generally available at Costco for reasonable prices as well. Just cut them down into portions and freeze the portions in batches to prep and cook later.)

Because of the size of the pork belly cut and variations between animals butchered for it, cuts can be rather inconsistent. But you can still cut portion sizes based on weight, not thickness. Most good pork belly preparations won’t be affected by thickness variations as they’re mostly low-and-slow processes. Still, the butchers at Stanley’s generally allow me to choose between three or four different slabs. I’m then able to get the one with the most consistent thickness from edge-to-edge even though it doesn’t much matter.

Score crosshatches into the fatty side of the pork belly. Using your hand (gloved if desired), fully combine the ingredients of the selected rub. Apply a generous amount of rub to all surfaces of the belly. Cover the belly in plastic wrap and store in a refrigerator for at least 24 hours.

A general-purpose preparation, this is what we cut into cubes to add to baked beans for the Pork Belly & Beans dish for the Father’s Day buffet. But you can also cut this as chunks to serve on sandwiches, burgers, to top ramen with, or other dishes, searing the cut pieces if you’d like. Variations are endless. 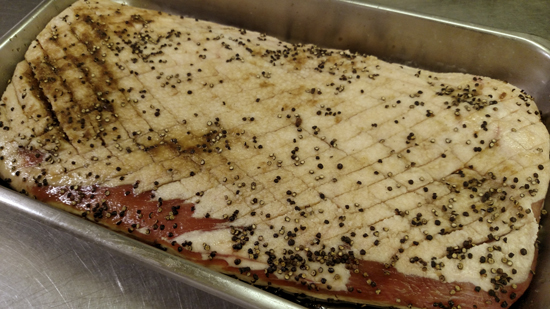 Using one of the rubs described above (or using your own), generously rub all sides and edges of the pork belly. Refrigerate it overnight, but no longer than 24 hours. 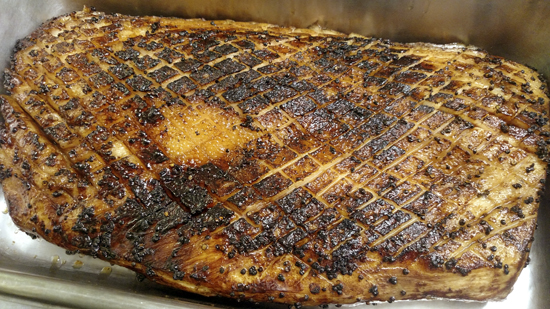 Heat a skillet, griddle or cast iron pan to 425F. Remove the plastic wrap from the pork belly and sear all sides, using tongs to hold it while searing the edges. Set aside to cool. 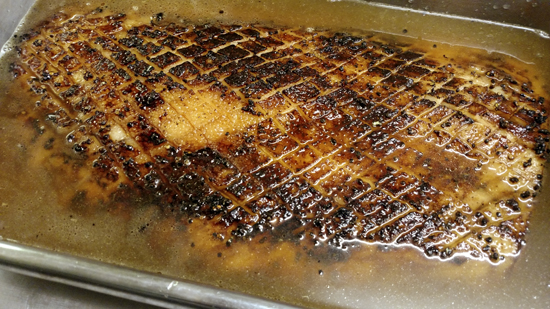 Heat an oven to 250F. Combine 32 oz each of beer and chicken stock (not broth). Place a rack or oven trivet in the bottom of a 6-quart oven-safe pot or roaster. Place the pork belly on the rack and add the braising liquid. Ensure the braising liquid is above the pork belly by at least an inch … If it isn’t, add more liquid in the 50/50 ratio to achieve that extra inch. Cover the pan with plastic wrap, then aluminum foil, ensuring a tight seal around the edges of the pan. Cook in the 250F oven for 3-1/2 hours.*

Remove from the braising liquid. Finish and serve as desired.

* We’re not looking for a specific temperature for the pork belly here, it will reach safe temperature about halfway through this amount of time. We’re looking instead for a pillowy texture, so just let it go.

Adapted from Momofuku, by David Chang and Peter Meehan, 2009

Using one of the rubs described above (or using your own), generously rub all sides and edges of the pork belly. Refrigerate it overnight, but no longer than 24 hours.

Remove from the oven and serve as desired.

* Prop the oven door open slightly for the first ten minutes here so the heat inside will drop more quickly.