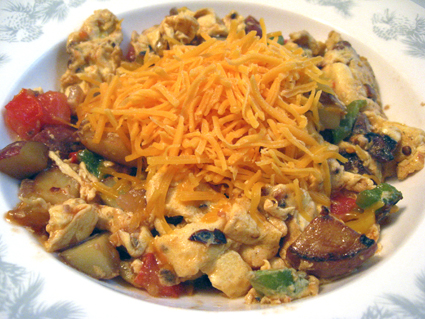 Lately, Mary and I have been getting into the whole Breakfast Skillet thing. We’ve always enjoyed them at restaurants where decent ones are served. Of course, there are restaurants where a so-called “breakfast skillet” is nothing more than layers of ingredients from different parts of the kitchen. Open-face biscuits topped with browned sausage topped with shredded cheese topped with gravy topped with over-easy eggs … that’s not a skillet. That’s just a bunch of stuff piled together … a cook who doesn’t understand the concept.

More recently, our deeper enjoyment of Breakfast Skillets started with our trying those Jimmy Dean frozen skillet packages. (You know the ones … the ads with the guy in the sun suit?) We found we liked both the Southwestern and the sausage varieties, while the ham version seemed a bit dry. Disliking the fast food skillet burritos, we found it’s easy to create similar and better-tasting burritos with the Jimmy Dean packages, 10″ tortillas, salsa and sour cream for large numbers of teenagers. (We haven’t tried the bacon version of the Jimmy Dean skillets yet as we haven’t found it yet up here. (Strange, that.)) I then had the prime rib-based Lumberjack Skillet special at Bolles Harbor Café and have been hooked on the concept of skillets ever since.

It turns out that, made properly, a Breakfast Skillet can fall under the category of the Weight Watcher’s Core Plan. Use lean meats or poultry (rabbit?), potatoes, fresh vegetables, olive oil, Egg Beaters, and fat free cheese, and your Weight Watcher’s diners can enjoy a skillet with you.

Going the other way, a large cast iron skillet and a campfire at deer camp is all you need to cook a hearty breakfast to warm the bellies of hunters before heading out for the day. Bacon or smoked sausage, potatoes, chunks of cheddar, eggs if you have them … the guys will ask for this breakfast every morning.

The trick to making a decent Breakfast Skillet isn’t in the preparation of the ingredients or even in the planning of which ingredients you’ll use. The real trick is in the timing, as in, when the different prepped ingredients hit the pan. Every type of ingredient will have a different cook time, and that’s where your mind needs to be. Once you wrap your head around this, you’ll be able to create a skillet from just about anything you have on-hand.

Preheat a 10″ skillet over medium heat. If you’re using bacon or sausage, cook that off in the skillet. Remove the cooked meat to some paper towel, leaving the oil behind in the pan. If you’re not using meat, add olive oil to the skillet and let it heat up. Add minced garlic to the heated oil, letting the garlic infuse with the oil while you chop the potatoes into 3/8″ cubes. While the potatoes are starting to cook, coarsely chop a few slices of onion. After a beat or three, add the onions to the potatoes and toss together. While those start to cook, coarsely chop some bell peppers. When the peppers are chopped, take a couple sips of coffee prior to adding them to the cooking mixture and tossing them. While the mixture cooks some more, beat the eggs together (three for each diner). When the potatoes finally start getting brown, move the mixture to one side of the pan. In the other side, add a touch of olive oil and pour in the eggs. At this point (not before), add salt and pepper. While the eggs start to cook, scramble the eggs with the spatula while occasionally taking a break to chop tomatoes. Squeeze the chopped tomatoes between your hands to remove excess juice. (Don’t forget to pay attention to the eggs!) When the eggs are almost done scrambling throughout the mixture, add the tomatoes. Toss over the heat for about 20 seconds. Remove from the heat and serve, topping with shredded cheese and maybe some freshly-chopped chives.

It takes very little thought to figure out variations. How about that prime rib or BBQ’d pork left over from the previous evening? Chop it up and add it just before the eggs so the prime rib will heat through without overcooking. Making burritos? Add black beans and whole kernel corn at the same time as the bell pepper, adding some cilantro with the salt and pepper. Like seafood? Add crab meat just before the eggs, and top it all with sour cream and fresh dill.

There’s no reason not to cook a full skillet for breakfast. It takes very little time, is simple to personalize, you can easily use what’s on-hand, and, with a little extra preparation, it can be cooked for quite a few people rather rapidly.