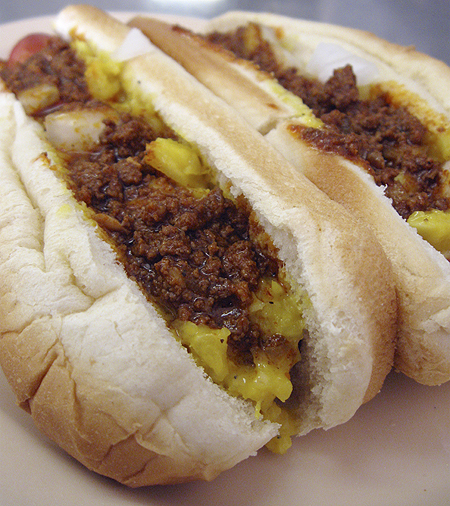 When I got to a hotel in Lynchburg, Virginia this past Wednesday it was well past 8:30 p.m. I’d been on the road for almost ten hours straight. At one point the GPS got me seriously lost in the hills east of New Haven, West Virginia, and I’d ended up on a one-lane road at the top of a ridge with nowhere to turn around with a sign in front of me which read, “Road Closed Ahead”.

The definition of irony: Not 36 hours after said GPS incident, the GPS manufacturer emailed me about upcoming map updates. Go figure.

The darned thing also led me east on route 60, through those nasty switchbacks that go up to the Blue Ridge Parkway in Shenendoah National Park, then back down again. The sun was still up when I started that section. It was down before I reached the ridge. I can’t stand driving those things in mid-day, but after dark it’s incredibly dangerous.

The gal at the hotel desk, Janelle, suggested I have a couple hot dogs at the Texas Inn, a 24/6 operation up at the next intersection. She claimed, “Best hot dogs in the world!” Too tired to chew more than what was stuck between my teeth, I thanked her anyway, went to my room, ignored the flossing, and went to bed. 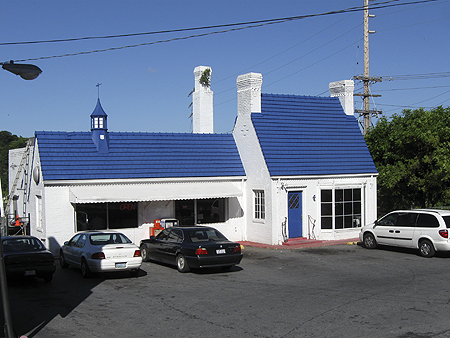 By Thursday evening my curiosity had gotten the best of me. I know what the best hot dogs in the world taste like, at least for me. Others will claim Detroit coneys, some Chicago, and yet others prefer Nathan’s Famous. You’ll never find a concensus on the subject, and frankly, I’ve given up trying to find one.

Still, I decided to head up to the Texas Inn and find out what she was talking about.

The little place is … little. Large on the outside, only the northern-most section of the building (the left end in the above photo) is open to customers. Inside, a stainless-steel counter wraps around an open kitchen and waitstaff area. The 15 stools at the counter are all the seats there are. 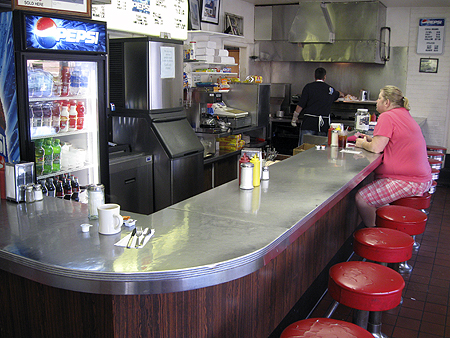 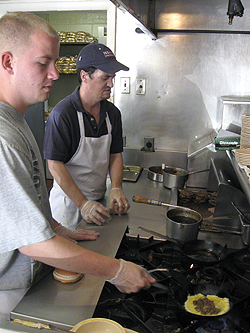 Parking myself at the stove end of the counter (last stool on the right please), I ordered a couple of the chili dogs Janelle had told me about. In fact, if I recall, I mentioned that she’d recommended the restaurant and the hot dogs. Almost immediately AJ, on the left in this photo, said, “We’re better known for our Cheesy Westerns“. Ok, ummm … what??

AJ made up my two chili dogs, with the chili made right there in the restaurant, and also filled me in on the sandwich he prefered to tell me about.

First off, the hot dogs were passable. I do have issues with steamed or boiled dogs that are proclaimed “Best hot dogs in the world”. Sorry Janelle, but the best dogs are grilled, plain and simple. I do have to say that, even though the chili looked greasy, it actually wasn’t. It had a good flavor, but I prefer it thicker anyway.

Back to AJ’s story …

The Cheesy Western. It’s a rather simple thing and, as AJ told me, the Texas Inn has been serving it since around 1935. I’d learn the following day that the sandwich has a number of adaptations in restaurants in Lynchburg and the surrounding area, but the Texas Inn is likely one of the originators, if not the originator of it.

The Cheesy Western sounded good. Really good. Not only that, in sitting there watching AJ work I saw a few of them slide by to waiting patrons. Quite a few, actually. I decided to go ahead and order one, which AJ proceeded to make up for me. 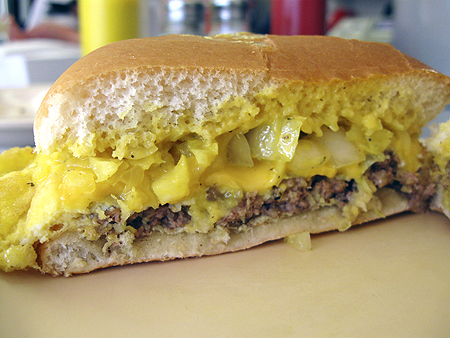 The way they do it is like this: Quarter-pound burgers are kept in supply throughout the day, made from fresh-ground beef grilled on a small grill next to the stove. The grill has a rotating lid to cover the burgers so they cook up correctly. When a customer orders a Cheesy Western, two eggs are beaten and poured into a small skillet. When they’re almost done the egg is flipped. One of the quarter-pound burgers is laid on the egg and a slice of American cheese is placed on the burger. The whole of it is laid on the bottom of the bun. The top of the bun has a “super-secret” sweet mustard relish spread on it that they make at the Inn, and chopped onions. This is then laid on top of the now-cheesy innards, the whole of it is cut in two for easier handling, plated and served.

I gotta tell ya’, the Cheesy Western is a lot better than the hot dogs were. The hamburger was nice and juicy, which was a given, given the covered grill they’re cooked on. The egg AJ cooked up for the sandwich was similar to a good fluffy omelet. And that sweet relish they make from their “super secret” recipe? Yeah, if I had had a fridge to keep it in for the weekend, I’d have gladly bought a quart of the stuff. It’s that good. And even though the relish was on the hot dogs as well, it’s far better as part of the Texas Inn’s Cheesy Western.

When something is this iconic and has been around as long as the Cheesy Western has been, it develops a following. I saw this in action the following morning when I headed to the Texas Inn to enjoy the breakfast in the photo below. In the 30 minutes I was there from 8:15 – 8:45 a.m., fifteen Cheesy Westerns went out the door in to-go bags, apparently to be saved for lunchtime on the Friday before Memorial Day. Those fifteen sandwiches were sold to eight customers … one ordered a bag of two, and two gentlemen each took a bag of four.

Decadent? Yes. Bad for the waistline, and the heart? Absolutely. Good??? 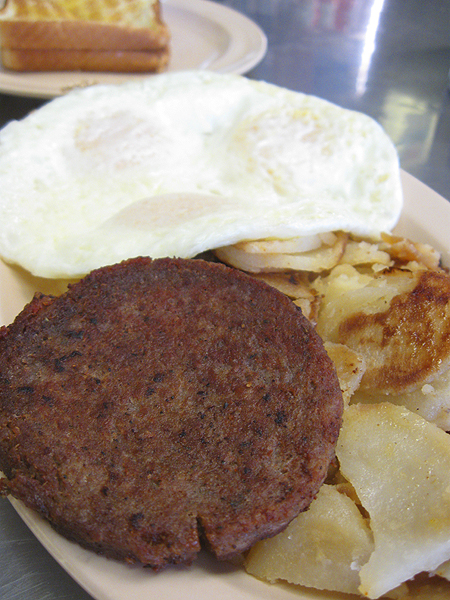 Breakfast at the Texas Inn. Don’t eat at the hotel restaurant.