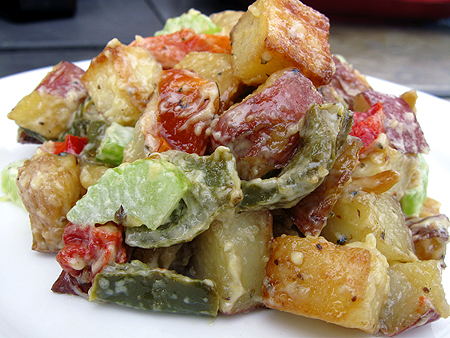 With mom being with God now, I wonder if she’ll be able to bring a halt to the Liske family curse of it raining whenever one of us makes potato salad? Maybe. I mean, the curse did start with her decades ago …

I’d made this particular batch of my Oven-Roasted Potato Salad last Saturday for our buddy Zack. In January when I blogged about this recipe being in that month’s issue of the venerable Grit magazine, I’d mentioned I was going to rewrite the recipe a bit in the future:

Truth be known though, I’m in the process of giving this recipe a redevelopment. Meat is included, and almost every time I’ve made it someone has said, “There’s meat in there? I can’t have it.” There will be two versions; A base version with no meat, and optional additions to include the beer-braised Polish kielbasa if you’d like.

Honestly though, Zack’s Jewish. Even though he doesn’t keep Kosher as many Jews do, the fact that I almost invariably feed the man pork when he’s here for dinner has recently been cause for some good-natured teasing. He loves the results of this potato salad recipe and asks for it often. But with its pork-based Kielbasa … well, it was time for to make the change to meatless last weekend.

It turned out quite nicely. I spent a little extra care with roasting the cubed potatoes so they’d come out of the oven a golden brown. The pre-roasted onions and peppers tasted better after being sautéed and caramelized in unsalted butter vs. the olive oil I’d always used. And as I was out of horseradish mustard, I found that using good yellow mustard and some pure ground horseradish made for a great flavor.

Just about everyone had seconds of this salad after their steaks were gone. There was about a pint of the salad left over, which Zack packed up and took home with him.

I can’t quite put my finger on why, but I get the feeling he probably liked the porkless version just a little bit better …