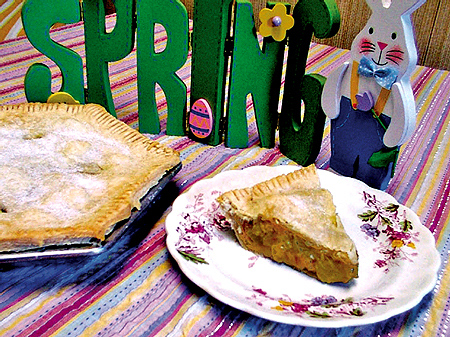 A photo of Grandma Saeger’s Old-Fashioned Rhubarb Pie, made by my mom Joyce and sister Barb for this photo. The photo was taken a few years ago with an original 1 megapixel Kodak DC3200 digital camera, which the kids referred to as “The Brick”.

Our friends over at Grit Magazine have published online a rather comprehensive article from the March/April 2009 issue on the subject of rhubarb. The article, by Sarah Belsinger, includes history and uses of the plant, some personal notes, and six recipes:

Like you, I wondered why there weren’t any pie recipes in this collection. Rhubarb pie seems to be the default line of thought for the leafy vegetable, which Ms. Belsinger points out at the beginning of the article. Further on, she gives her own thoughts:

I quite enjoy rhubarb pie, crumble, crisp and sauce, alone or in combination with other fruits. However, in my research and recipe search, I was looking for savory, rather than sweet, uses of rhubarb. The reason for this is that when I smell and taste rhubarb, I don’t immediately think of desserts, since it has flavorful, savory characteristics … My quest led me to a few – very few – recipes using rhubarb in main and side dishes.

Later, in the opening for the recipe for Strawberry Rhubarb Crisp she does mention that, “This versatile filling can be used for a 9-or10-inch pie with a top and bottom crust”. So, there ya’ go … a recipe for Rhubarb Pie, right there in Sarah’s article.

The following recipe, Grandma Saeger’s Old-Fashioned Rhubarb Pie, is a classic Michigan dessert, showing up at countless get-togethers and reunions. My mom has made this particular recipe for rhubarb pie since the 1940’s. As she learned it from her mom, my Grandma Saeger, the recipe has been around for quite a long time, possibly a century or so. It seems rather elaborate but is in reality quite simple to make and, if care is taken, will come out perfectly almost every time. If you’ve never tried a freshly‐baked, still‐warm piece of rhubarb pie topped with ice‐cold whipped topping, here’s your chance.

The recipe is available here as a two-page PDF. (You may need to download and install Adobe Acrobat Reader to view the PDF version of the recipe.) The recipe itself is rather lengthy and is completely listed from the PDF after the jump.

Dump the flour and the salt into the mixing bowl and mix them together. Using a spoon, spread pieces of the shortening throughout the bowl. Cut the shortening into the dry mixture with the pastry cutter or fork. Add the water to the bowl, and mix till doughy.

Divide the dough into two balls. Sprinkle some of the extra flour onto a surface for rolling. Also sprinkle some on the outside of one of the dough balls. Use your hands to begin spreading out the dough, then use the rolling pin to roll it out until it’s about 12” in diameter and 1/8” thick.

Roll about half the rolled-out crust back over the rolling pin. Pick up the dough with the rolling pin and roll it onto the pie pan. Use your fingers to form the dough to the inside of pan, then use the sharp knife to trim the excess dough from around the edge of the pan. Roll up this excess dough, dip it in some sugar … and eat it, washing it down with some milk.

Creating The Filling, and Finishing The Pie

Preheat an oven to 425 degrees F. Dump the sugar and flour into the large mixing bowl, mixing them well. Add the cinnamon and salt, continuing mixing until everything is well-distributed. Measure out 2/3 cup of this mixture and sprinkle it over the bottom and inside of the crust dough in the pie pan, making sure not to get any on the flat edge.

Roll out the second dough ball like the first. When you have half of it rolled over the rolling pin, spread some cold water around the edge of the crust already in the pie pan. Roll the second crust loosely over the rest of the pie. Use the sharp knife to trim the excess dough from around the edge of the pan. Also cut a few 2” long slits in the top crust so steam will release while cooking. With the ends of the tines on the fork, press down on the edges of both crust doughs together to seal them shut. As before, roll up the excess dough, dip it in some sugar, and eat it, washing it down with some milk.

Place the assembled pie on the bottom rack of the oven and bake for 30—40 minutes. In checking to see if it’s really done cooking, jab a fork into the pie. The rhubarb should be still slightly tender but not soft, and definitely not still crunchy.

Immediately after removing the pie from the oven, lightly sprinkle the top crust with some of the extra sugar. The sugar should stick to the crust and partially caramelize while also staying a brilliant white color.

Let the pie cool at least 5 minutes before serving it topped with ice cold whipped topping.

Making A Strawberry-Rhubarb Pie
Strawberry-rhubarb pies have become extremely popular in recent years. They’re a bit sweeter than a classic rhubarb pie, and seem to be well-liked by those who can’t quite enjoy the tartness of rhubarb. Just replace one or two of the four cups of diced rhubarb with cleaned and diced (or sliced) strawberries, completing the rest of the pie as described. As rhubarb and strawberry seasons don’t quite match, these two ingredients might be difficult to find at their peaks of freshness at the same time. But once you make this recipe this way, you’ll find the search is well worth the effort.