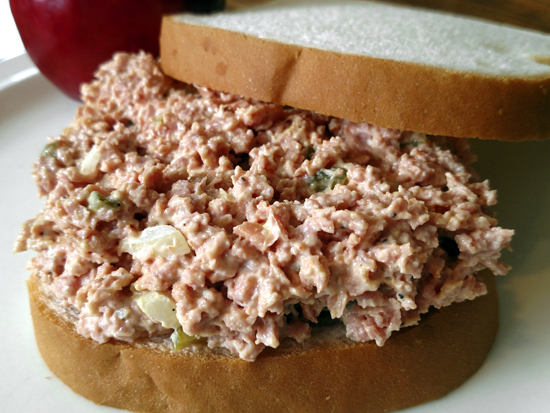 One of my Ground Bologna sandwiches on white bread, on February 28, 2016. Yeah, I like them even thicker than this.

There’s a deli/butcher shop in Burton, Michigan, called Nehring’s Market. We’re more than acquaintances with the Nehring’s as Ralph and his wife are my late younger sister Janet’s Godparents. Ralph and his crew of cutters make a Ground Bologna Sandwich Spread that tastes almost exactly like this recipe. This recipe is what my mom made for at least five decades.

Somewhere down the line, we think mom’s recipe, and what the Nehring’s crew offers in the store, crossed paths and are, in fact, of the same lineage. 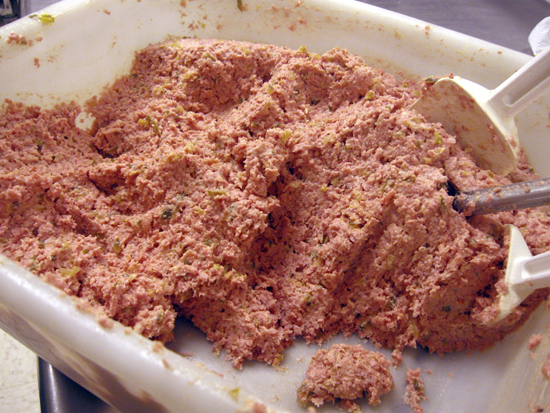 A working bin of the spread at Nehring’s Market, December 30, 2008, in the middle of being transferred to the small tubs for sale in the case.

This lunchtime and picnic favorite is available by the pound in some variation in just about every deli and butcher shop in the midwest. It’s simple to make: Kids absolutely love helping grind the bologna in the meat grinder. A lot of this recipe doesn’t actually need to be measured. This is one recipe you can make ingredient-by-ingredient, tasting as you go, creating your own flavor, and using different brands and various flavors of each of the ingredients.

Ground Bologna Sandwich Spread goes by at least a couple different names. There are likely others, which I’m attempting to find. In some places it’s known as:

Historical Notes: In chats with Hungry Christel up in Winnipeg, Manitoba, Canada, we believe the historical recipe this preparation came from is what’s called Fleischsalat. A simple staple in Germany that’s loosely translated as “meat salad”, it’s different from the similar preparation Wurstsalat or “sausage salad” in that Fleischsalat contains a German mayonnaise that’s mostly sunflower oil, among other differences. You can use a German ring bologna (aka “ringwurst”) for Fleischsalat, and you need to use a German pickle as well … but it’s the German delicatessan mayonnaise (there’s another style that’s a different preparation) that you’ll find to be expensive.

You can take the leap to make your own Leberkäse, which is a baked loaf of meat, to use instead of the ring bologna. It would also certainly be less expensive to make your own sunflower oil-based German mayonnaise. Be aware though that homemade mayonnaise only has a life of a couple days due to the use of raw eggs in its preparation. But remember, for authenticity German-style ingredients matter.

It appears as though a modified version of Fleischsalat was served as a sandwich to German & Italian Prisoners Of War held by Americans during WWII. Volume 2 of 3 of “Prisoner Of War Operations” consists of a number of documents beginning with a “War Department Policy With Respect to Labor of Prisoners of War” dated January 10, 1943:

“Suggested types of work for such prisoners are employment in War Department owned and operated laundries; brush clearance and construction of fire breaks; mosquito control, soil conservation and agricultural projects; construction and repair of highways and drainage ditches; strip mining and quarrying; and other work of a character similar to the foregoing.”

“II—PRISONERS OF WAR.—1. Shortage of meat in the commercial market and difficulties attending the procurement of both canned and fresh meat and other critical items for the armed forces make it imperative that such items used for prisoner of war messes be reduced to a minimum and that meat be confined to varieties which are in least demand by American citizens … Issue charts will indicate a maximum of 4 ounces of meat per man per day including eggs.
…..
e. Sausage products will be limited to those products authorized by OPA specifications for civilians according to MPB 389; bologna and frankfurters, types 3 and 4; liver sausage other than Braunschweiger; liver loaf; pork, or breakfast sausage, types 3 or 4; minced luncheon meat; berliner sausage; meat loaf, miscellaneous, types 3 and 4; Polish sausage, type 3, MPR 389, and scrapple.”

Finally, a “Prisoner Of War Menu Guide for German And Italian Prisoners Of War” dated August 4, 1945, specifies 20 lbs of bologna per 100 men in each instance of it being served during a 10-day menu, which fits the specification of “a maximum of 4 ounces of meat per man per day.”

The modified Fleischsalat then appears as item #4 within this Menu Guide under Sandwiches: 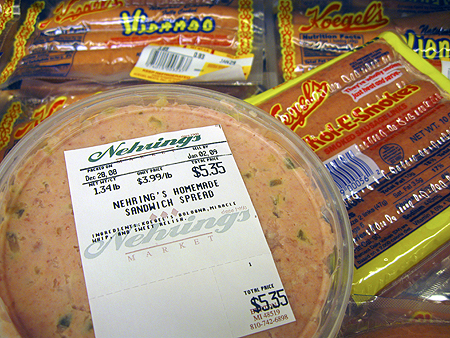 This is the real article here; Nehring’s Homemade Sandwich Spread, made with Koegel’s Bologna and photographed in Nehring’s own Koegel meat case.

Koegel’s Ring Bologna is the only stuff most home cooks use for this recipe. Albert Koegel was raised in the city of Durlach, Germany, in the late 1800s. When he was of age he joined one of Germany’s well-respected apprenticeship programs under the supervision of a Master Butcher. In a few years he had earned his Meister Wurstmacher designation, indicating he was a Master Sausagemaker. The product I use, shown below, is his own original recipe from the early 20th century. Find yourself a good local German meatpacker (there are many, such as at Alpine Village in Torrance, California) and use their ring bologna.

There’s another option as well, which is what Nehring’s uses. We’ll get to that shortly … 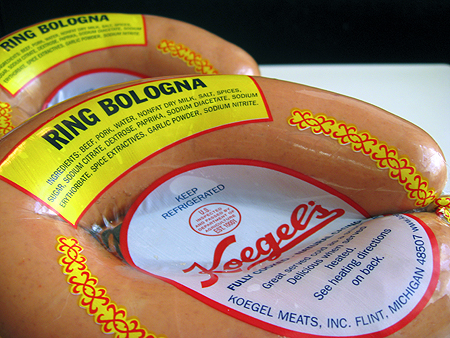 Koegel ring bologna, one of the preferred products for this recipe.

In the recipe below for Ground Bologna Sandwich Spread, I include a step about skinning the ring bologna before grinding it. However, the hot dogs in natural casings for the Homestyle Flint-Style Coney Sauce that I make regularly don’t get skinned before being sent through the same grinder. Unfortunately one day my brain swapped the two procedures. I made a batch of this spread for Mary and I … while only glancing at the recipe for ingredient amounts. As I was grinding the ring bologna, I noticed the ground bologna seemed to stay inside of the grinder more than usual. I thought maybe the disks on the front of the grinder were simply stuffed so, using a butter knife, I dug all the meat out of the disassembled grinder, then finished the batch of sandwich spread.

The following day after eating sandwiches made from this batch for lunch, we had a good laugh (more Mary than myself as it was at my expense!) over having to dig large pieces of natural casing from each bite of our sandwiches. 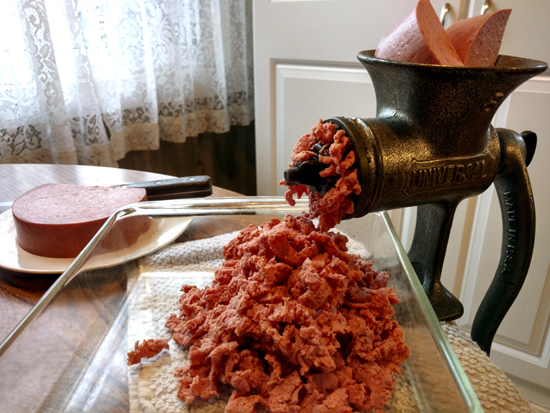 Chunks of Koegel bulk bologna from a 10-lb chubb, the other preferred bologna for use here.

In January 2017 while visiting up north near Flint, and at Nehring’s Market itself while getting some ring bologna for this recipe, I asked for a couple lbs of beef bologna from a 10-lb chubb. I asked for it not to be sliced as I was planning on slicing it about 3/8″ thick, especially since I already had the ring bologna for the spread. The meat cutter looked at me strangely and, while holding the chubb of lunchmeat bologna, said “But this is what we use for the spread.” Ummm … what?? It turns out home cooks have likely used the ring bologna because it’s more readily available in most stores. (I’ve found Koegel’s ring bologna as far away as Lafayette, Indiana.) But the chubbs of beef bologna are generally only found in delis in Genesee County and surrounding areas, while grinding slices from the 1-lb packs is a royal pain.

The bottom line: Ring bologna is not a requirement. You could also use a good German-style beef lunchmeat bologna. (Again, for accurate flavor make sure it’s not from a Dutch-style company.) 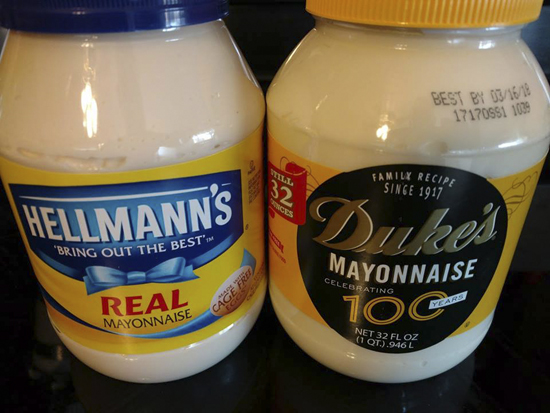 The only two commercial mayonnaise that are acceptable in this recipe. While using Hellmann’s for decades, we’ve switched to Duke’s for its extra creaminess and richness, and almost zero “twang”.

A few notes about the ingredients: 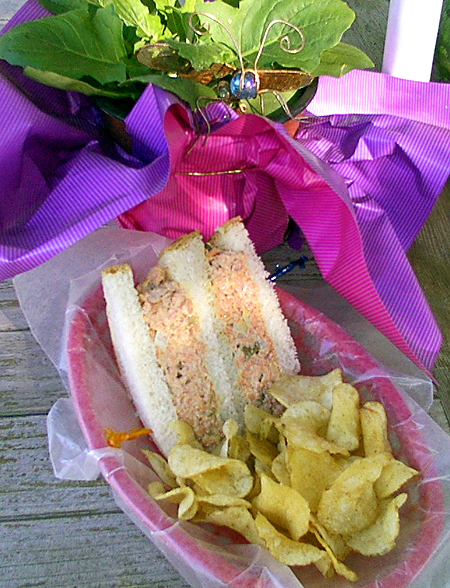 Make all kinds of good stuff, and to enhance your reputation in the kitchen, make sure you can repeat it. And be sure that I will skin the ring bologna for the Ground Bologna Sandwich Spread from now on.

This lunchtime and picnic favorite is available by the pound in some variation in just about every deli and butcher shop in the midwest. This is one recipe you can make ingredient-by-ingredient, tasting as you go, creating your own flavor, and using different brands and various flavors of each of the ingredients.
Prep Time20 mins
Course: Sandwiches
Cuisine: American, German
Keyword: bologna, bologna & pickle, fleischsalat, funeral salad, ground bologna, ham salad, ham spread, monkey meat, pm sandwiches, sandwich, spread