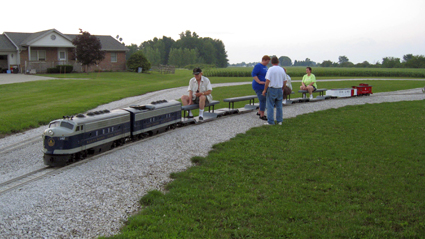 What does the 7.5″ train in the above picture have to do with the amazing breakfast in the following photo, which I ate? (Er, the food, not the train.) 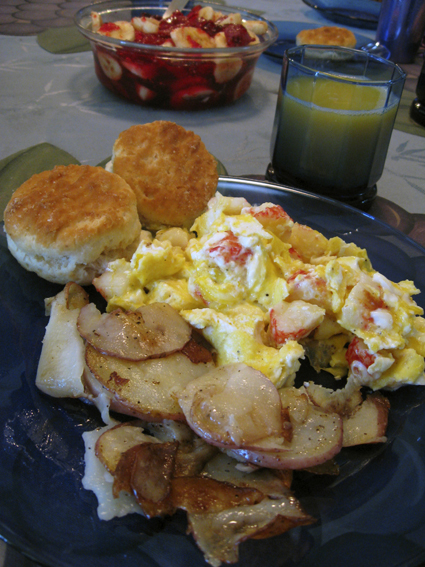 Well, lemme tell you about a great weekend we had with the wonderful folks at the B&B Railroad Depot Bed & Breakfast in Oregon, Ohio … 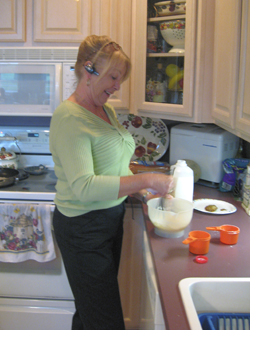 Back on June 23rd I’d blogged about a day trip to the Maumee Bay State Park near the southwest corner of Lake Erie on Cedar Point Road east of Oregon, Ohio. Toward the bottom of that post I spent a few paragraphs talking about how we’d stumbled upon the B&B Railroad Depot Bed & Breakfast. I finished those paragraphs with the following: “Five years ago, Linda Brinkman’s husband Nate, a boilermaker by trade, had put together the ridable train that surrounds the house. At the time, the house was a third as big as it is now. Being a commercial contractor, Linda, as she put it, “blew the roof off” the one-story house and expanded it into her dream of having a Bed & Breakfast that the home is now … My dad has been a railroad nut for most of his 84 years. Not only that, he and mom love breakfast as much as I do. The next time they’re down for the weekend, we’re pretty sure where we’re all going to stay.” 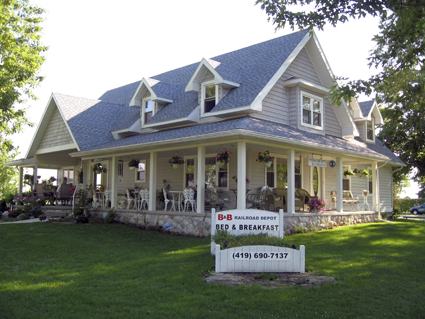 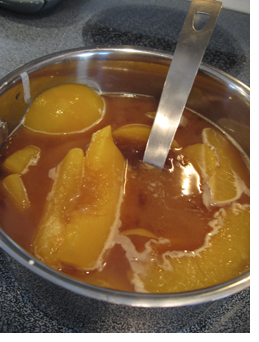 This past Friday my parents, Erwin and Joyce, and two of my sisters, Carol and Janet, arrived for the first time since we’d found this Bed & Breakfast. As we drove up to the house, my dad about had a fit … “They have a train??” It seems mom and the others had told him about the ridable train around the house, but it hadn’t quite registered with him. Of course, he was all smiles and was probably more in his element than any of us had seen him for quite a while. Besides, Nate just about adopted dad immediately, calling dad “Pops” and swapping stories about trains, military service, and just about anything else the two of them found common ground on. But of course, a Bed & Breakfast should be about a warm roof over your head, comfortable surroundings, a host family that honestly cares about their guests … and wholesome, satisfying and beautiful food first thing in the morning. The B&B Railroad Depot is all that and more. 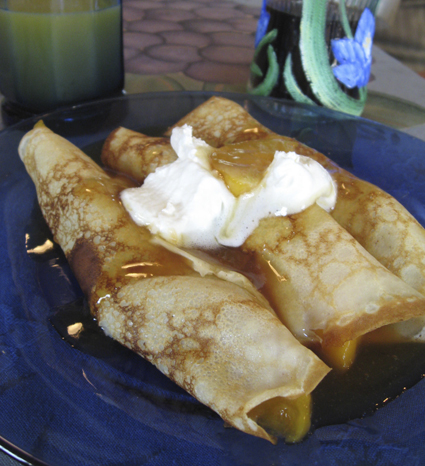 French Crepes with Peaches, made with the fresh peaches
and syrup in the pot in the previous photo.

When you think of hotel food in a place that doesn’t charge an arm-and-a-leg, you think of the concept of the “Continental Breakfast”. Sometimes nothing more than some thawed frozen “danishes” and some orange juice from concentrate and military-grade coffee, it’s a lucky find to locate a hotel that will also include cereal and milk, and maybe day-old bagels with expired cream cheese. Mary and I have stayed at places that also include hard-boiled eggs and are now stocking waffle mix in a pitcher next to a do-it-yourself waffle station, but these aren’t as common yet.

I’ll tell you what, though, there aren’t many higher-end restaurants that can create crepes as wonderful to look at as the ones Linda Brinkman creates. Oh, yeah … they taste great, too! All the food in these photos are exactly as Linda served them. She didn’t even know I was going to take pictures, and only did what she’s used to doing. 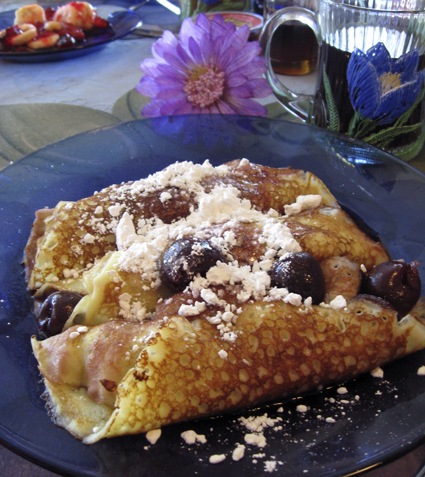 French Crepes with Cherries, the cherries being firm and
juicy with just the right combination of tartness and sweetness. 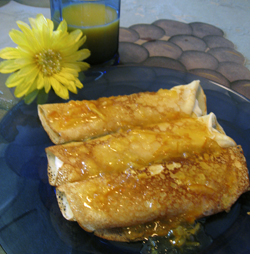 One thing we didn’t do was to have any of these breakfasts on the glass tables out on the wraparound porch on the south and west sides of the house, or as Linda said, “Out on the lanai.” When they were putting together the concept for the B&B Railroad Depot, one of her ideas was to develop a B&B she’d call “The Lanai”. They’d serve all kinds of tropical drinks out on the lanai itself, including the tempting French Crepes with Tropical Sauce you see in this photo. I think it’s a wonderful idea myself. Let’s see, we’d have to move to Hawaii or Bermuda first … it it’s Bermuda, I’d have to get some of those funky Bermuda shorts … oh, right, I’d have to get Linda’s recipe for this tropical sauce …

Oh, here’s a neat idea! Take a close look at this photo of the Ham & Cheese Omelet with Fried Redskin Potatoes Janet had for breakfast the first morning: 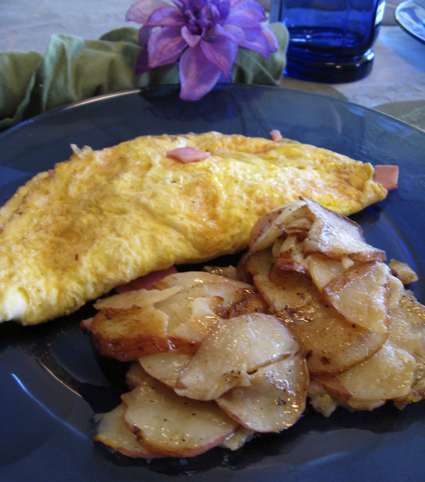 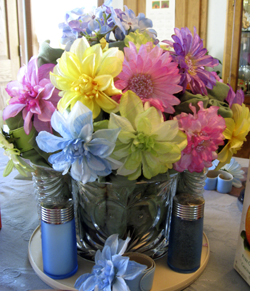 No, don’t look at the food. Look at the top of the image … the flatware service in a florist-green linen napkin, with the flower banded to it. Now look at the photo on the left. Yup, this vase is where that flatware service came from! The vase is loaded with more than a couple dozen of those flatware packs and nothing else! In what some have called one of her “Martha Stewart moments”, Linda had found the flowers and flexible bands, one of which you can see at the bottom of the photo here. These are simply imitation corsage armbands for little girls! Linda realized they were exactly the right size as a napkin ring and picked up a few dozen of them in assorted colors, along with the florist-green linen napkins. Once loaded with them in the bouquet, the vase is in the middle of the table on a turntable, along with those cobalt-blue salt-and-pepper shakers. How cool is that?

Beyond all the scrumptious food Linda made for us in the mornings, Nate would come in and say things such as, “Erwin, there’s about 20 minutes of sunlight left today … Let’s get a ride in while we can!” 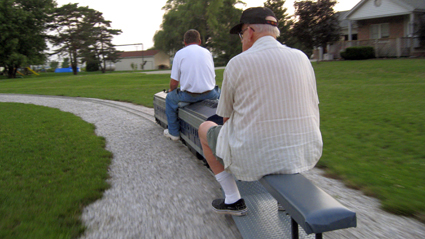 Ahhh, what a happy man! 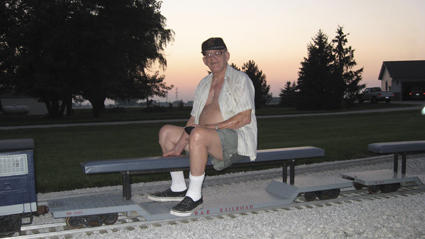 Heartfelt thanks to Nate and Linda Brinkman for such great times this weekend. We’ll all be going back!