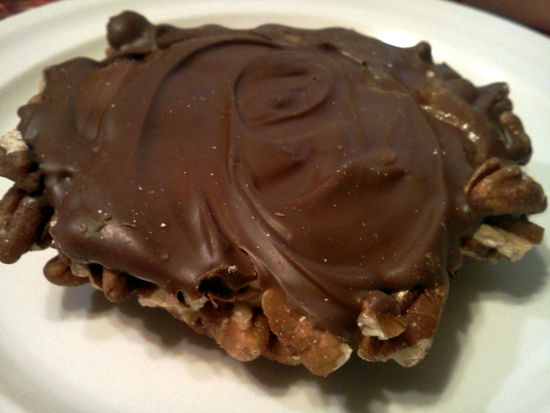 The Monster Candy, about 4″ in diameter, from May’s Candy Shop on Mackinac Island in the straits between the peninsulas of Michigan.

It was just over a year ago Mary and I were on Mackinac Island a few hundred miles north of here. One of the shops I had wanted to visit for a few years was May’s Candy Shop. Normally I would visit a shop like that solely for their goods, in the case of May’s the fudge their family has been known for since the 1930s on the island. I didn’t go there specifically for the fudge though that day. Head Candymaker Lee May was a friend from the University of Michigan School of Art & Design, where I was video studio coordinator while Lee was a student. Unfortunately, during that week last August, Lee was in Chicago getting things ready for graduate school in the fall.

A weird thing happened. I left the candy shop after buying … nothing. And I really don’t know why.

Fast-forward to just a few weeks ago. On their Facebook page May’s Candy Shop wrote, “Happy September 1st everyone! We’ve reached our last SPOTLIGHT candy of the season… Monsters! Remember, all you have to do is like, comment, or post on our page and you’ll be entered to win!” Four people commented, and ten plus myself clicked the “Like” link. Five days later, it turned out a Monster Candy was headed my way!

The box showed up this morning: 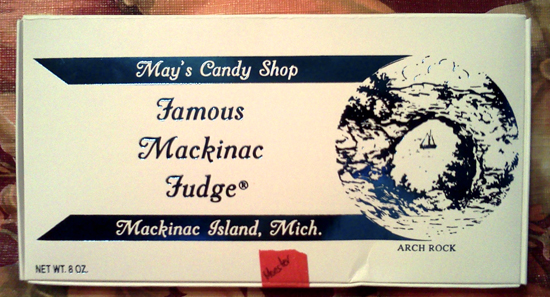 The box itself is a classy thing on its own, being covered with foil-stamped white glossy paper. The old-style image of Arch Rock, a popular tourist attraction on the island, actually shows proper perspective of a sailboat on Lake Huron as seen through the opening in the rock from the correct height and distance. And while the box is definitely intended for use with May’s well-known fudge, the writing on the red tape holding it closed told what was actually inside. 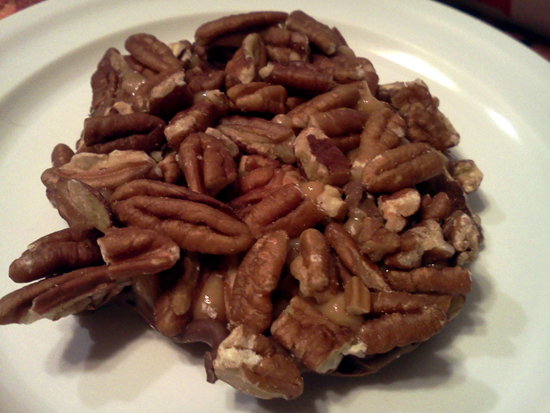 When I opened the box I saw the Monster Candy as seen in the first photo in this post in a sealed plastic bag. It already looked amazing, the chocolate seemingly swirled on top as thickly as Lee’s people could get it on there without being sloppy. Flipping it over on a plate, it became apparent the foundation of the Monster Candy is dozens of walnut halves. But what’s that glossy stuff that had seeped through the walnuts? I had forgotten they had posted this particular photo from inside the main of their three stores: 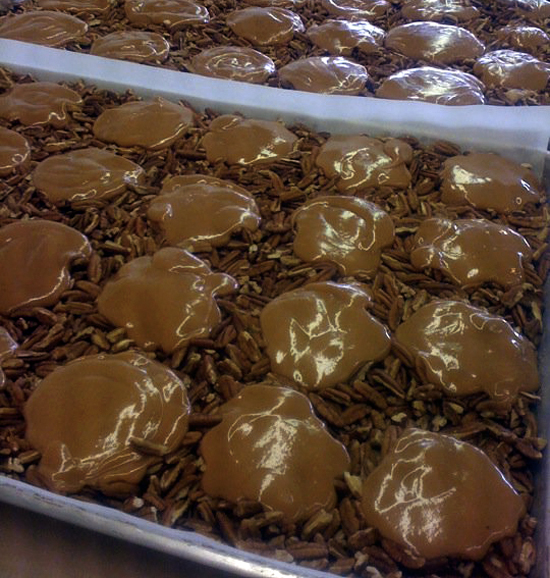 I grabbed a sharp boning knife and, spitting the thing down the middle, found the utter deliciousness I was trying to figure out: 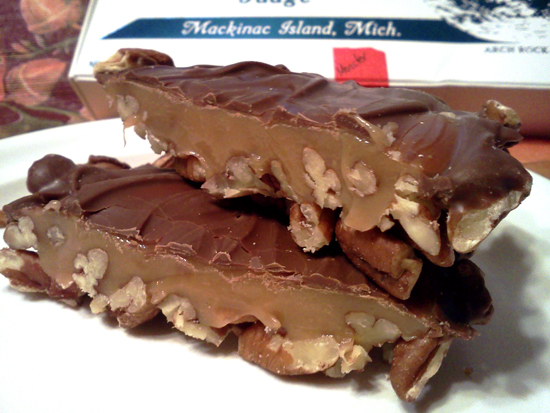 So why are they called Monster Candy when they’re so obviously a larger version of, well, something else? To be blunt, that term is actually copyrighted by another company. Besides, these are considerably larger and would have to be called the “sea” version of … that other thing. These are different though. I was concerned about Lee’s use of walnuts as I haven’t had good experiences with them and thought I wouldn’t like it. But these walnuts are certainly fresher than most others, not stale, and definitely not hard on the teeth. The soft caramel inside is amazingly smooth and not overly rich, having just the right amount of sweetness. And the chocolate is simply … It’s obvious May’s has tons of experience creating chocolate as this is some of the best I’ve ever eaten.

This Monster Candy tasted like I need more. That’s all there is to it. Thanks, May’s!

I think next time we go to May’s on Mackinac Island I’ll need lots of money. And maybe a flatbed cart.