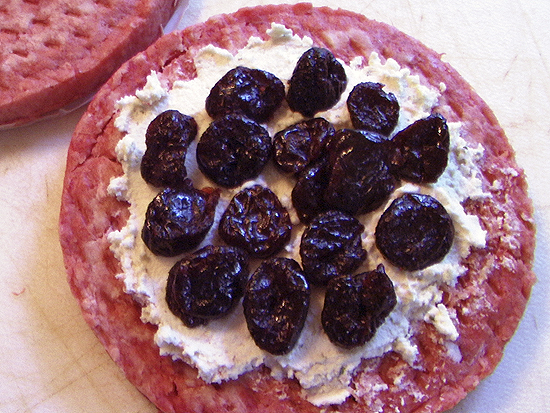 This past Wednesday evening we were fortunate to snag tickets for the opening night of the latest national tour of Fiddler On The Roof. The first two performances were at the Fox Theatre in downtown Detroit before the company moved on to Wisconsin … they’re currently in North Dakota and will tour nationally till June.

Before the show we headed next door to the popular Hockeytown Café, a sports bar/restaurant to honor both the Detroit Red Wings and also to curate a collection of custom Harley-Davidson motorcycles designed with the Red Wings and Detroit Tigers in mind. It’s a nice place, with music that’s not overbearing, a friendly and attentive staff, and some seriously good food.

The one thing that jumped out of the menu at us right away was the Michigan Cherry Burger. The menu describes it as, “Our famous 1/2 pound burger topped with Traverse City cherries & Boursin cheese and served with lettuce, tomato and red onion.” We went ahead and ordered a couple of these beasties and thoroughly enjoyed them. The sweetness of the cherries, combined with the garlic and herbs of the Boursin cheese all on top of a tasty burger, all complimented each other nicely.

I decided I’d make them at home for the family. 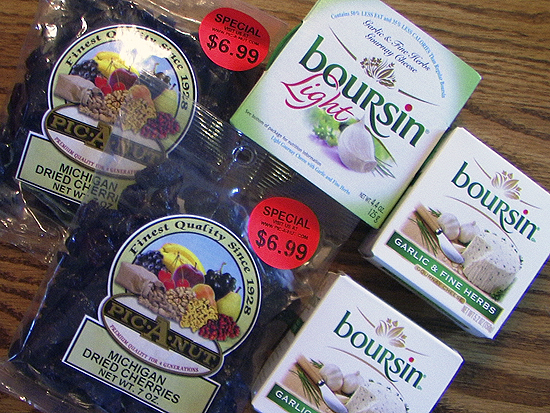 Pic-A-Nut in Detroit distributes dried Michigan cherries from the orchards near Traverse City. Boursin Cheese, created by Francois Boursin in Normandy, France, in 1957, is made by Bel Brands USA, a subsidiary of the Bel company in Paris. Both are readily available in Michigan, with the cherries being from Kroger and the cheese being from Meijer.

We made the burgers stuffed vs. layered as Hockeytown has them. It’s difficult to take a photo of a stuffed burger … I’ve done it before and the pics turn out to be fairly lame. In the first photo above we took the other pre-formed 1/4 lb chuck burger, topped the cheese and cherries with it, and then crimped and sealed the edges. We then grilled them outside for the best flavor before topping them with the same kinds of lettuce, tomato and red onion as the restaurant.

They turned out quite nicely, to the point where one of my kids ate two of them … a whole pound of chuck plus toppings and cheese. And he’s a younger teenager who weighs no more than 100 lbs … Mary’s burger was ground turkey, with the light Boursin stuffed inside with the cherries, which was then pan-fried in a bit of olive oil. She said it was excellent, and was a nice lighter representation of the beef version.

We’ll certainly be making these again.