This past Saturday we picked up my son Adam at Camp Tapico, a Boy Scout camp east of Kalkaska. He’d been there for three weeks, two of them as a Counselor-In-Training. The last week he was there he was able to do what he felt most comfortable with: cooking! An area of the camp had been cordoned-off with a simple wooden fence. Within this area of about 2,500 square feet, 14-year-old Adam and his mentor Jim, an older gentleman, gave visiting Scoutmasters a taste of what Boy Scout camp was like in the 1950’s. I’ll let Adam give you his own tour of the cooking equipment he used to cook meals for these Scoutmasters … 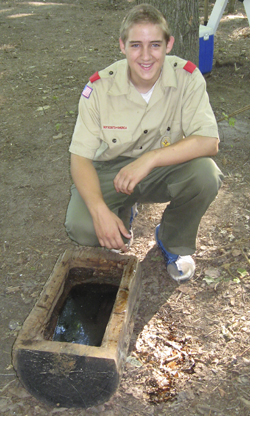 “This is simply called ‘Coffee in a Log’. To make coffee this way, you need a nice piece of hollowed-out wood (cherry, or oak, with this one being made of cherry), coffee grounds, rocks, and water. First, you set the rocks in a fire pit, then build a fire. Heat up the rocks in the fire for a couple of hours until they get really hot. Add the water to the trough in the log, but leave enough room so you can add the rocks. Then you sprinkle however many coffee grounds you want into the water. After the rocks get extremely hot, knock off the ashes and throw the rocks into the log to heat the coffee. After the coffee is hot you just sprinkle some cold water into the coffee to make the grounds settle to the bottom. Dip your cup in and enjoy!” 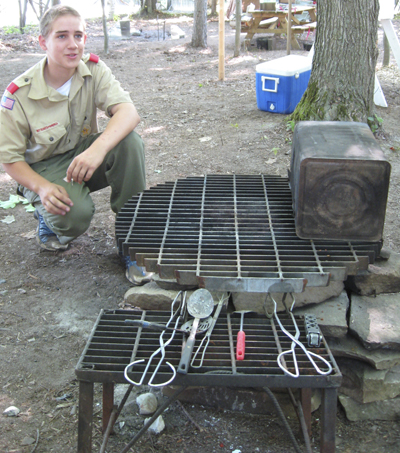 “This is where we cooked the majority of our meals. We made this base out of flat rocks and formed a ‘U’ shape to trap heat. Since the steel grill was far enough away from the fire we were able to cook almost anything without burning it.” 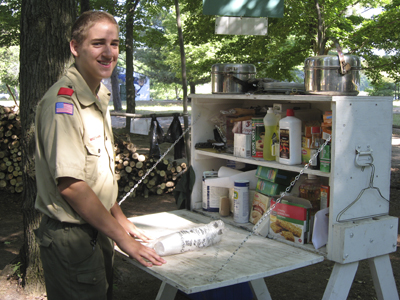 “This is the pantry where we kept all our non-perishable foods and cooking supplies. We also had a smaller one on the other side of the cooking area.” 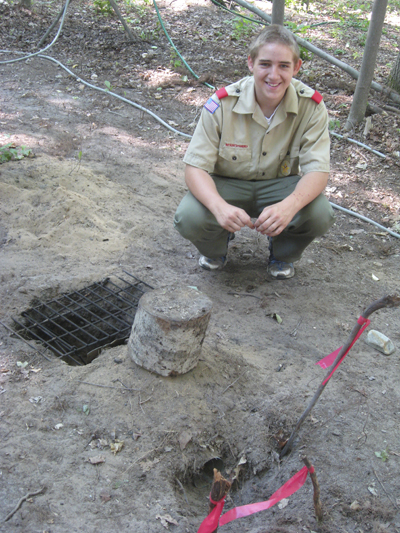 “This is called a ‘Dakota Fire’. This kind of fire is used in the Dakotas because the long grass would prevent people from building fires above ground. The larger hole was where we had the fire and the smaller hole had a tunnel dug through it to supply oxygen to the fire in the larger hole. We cooked our meats on this, and tried to make gingerbread over it (the gingerbread didn’t work too well!)”