A pair of Flint-Style Coneys at Palace Coney Island at the Genesee Valley Shopping Center in Flint, using their own recipe with Abbott’s ground beef heart sauce base, Koegel Coney Franks, and Coney buns from Mr. Bread.

Both of these items are available at the Abbott’s Meat plant on Blackington northwest of Corunna and Ballenger. The plant has no retail shop … But you’re welcome to walk in the door, go to the receptionist’s window, and ask for what you’d like. It’ll be brought out to you.

Koegel Coney Franks are also available for home purchase from Lynch Shipping, in partnership with Koegel Meats, in a 10 lb box at buykoegels.com.

If you know someone from Michigan and you offer them a chili dog somewhere, you might hear a response similar to “Well it’s not a coney, but alright.” If you’re the person from Michigan in that conversation, you’ll know there’s nothing that can replace the coney you know and love. It has to have the “snap” of the natural lamb or sheep casing on a properly-grilled German “coney dog”, which is a variation of the European-style Frankfurter Würstel or Vienna sausage. The coney has to be topped with a flavorful meat topping having the memorable flavor of ground beef heart and maybe ground beef along with some other organ meats (depending on your style and/or restaurant of choice), cumin, and paprika. And purists always have that meat topping garnished with a couple lines of good yellow mustard, and onions minced to be silky smooth.

If you’re the kind of person who gets deeper into this sort of thing, you’ll know there are three basic coney varieties: The dry-sauced Jackson Coney, developed by George Todoroff in about 1914; The juicier-sauced Detroit Coney, developed by someone at either of the side-by-side American or Lafayette Coney Islands (there are too many versions of the story to sort out) in about 1917; And of course the Flint Coney, with the Flint Coney Island restaurant opening south of the Flint River at 202 S. Saginaw St. in 1926 (the year it first showed up in R.L. Polk & Co.’s Flint City Directory).

There is serious debate about which one of these is “best”. Even between the two Detroit Coney shops that sit next to each other and are owned and operated by cousins in the Keros family, there are “turf wars”. Honestly, you’ll like what you grew up with, and what you like will always be “best” for you. It really is that simple. None are “best”, they’re all good, and they all have their followers. and detractors. That will never change.

There is also regular discussion about which of these three evolved into the other two. The Jackson and Detroit Coney shops actually had no bearing on the development of the Flint Coney. Likewise, the originators of all three Coneys likely had no clue what the others were doing until long after the fact.

One thing I’m doing my best to correct, is peoples’ perception of what a Flint Coney really is. So before we go any further, let’s get something straight:

There is no such thing as a single restaurant recipe for Flint Coney sauce.

Many people will insist that the a “Flint Coney sauce” recipe made with ground beef, ground hot dogs, and tomato paste is “the original Recipe” and “my [fill in the blank] relative got the recipe from the owner/the owner’s wife/an employee/it was published in the Journal after the owner’s death”. Even if I tell people the retaurants begin with a 25lb bag of raw ground beef hearts from Abbott’s Meat, they tell me I’m wrong.

For this particular photo on the morning of September 20, 2019, the good folks at Abbott’s Meat quite kindly brought out a fresh 25lb bag of the unspiced Coney Topping Mix they’ve supplied to restaurants since the 1920s. The staffer then set a 4lb bag of the Ready To Cook topping you can buy through BuyKoegels.com next to the unspiced base. Of course, the Ready To Cook topping is also available in a 10lb bag.

A couple of notes about the 25lb restaurant base product: It’s provided unfrozen, which you can see from the label where it reads “Keep Refigerated”. Because it’s not frozen, this product is also unavailable through BuyKoegels.com. However, you can buy it at Abbott’s Meat and spice it your own way. As it’s not frozen, dividing this large amount into quart freezer bags, freezing it, and then using only what you need is certainly possible. It’s also rather inexpensive, that morning going for about $44, or about $1.75/lb.

We can now compare the labels to see how Abbott’s creates a “finished” Flint coney sauce.

These are both raw products, so make sure to cook them thoroughly.

The completed “ready to cook” product adds Onions, Spices, Monosodium Glutamate and Garlic Powder to the same Coney Topping Mix that the restaurants start with. When I make Flint Coney sauce using beef hearts I’ve ground myself, for the onions I use a white onion (not sweet) and mince them rather fine. This is the same minced onion I top the sauce with when serving them. Also, my three spices to add for that “Spices” ingredient are Mild Chili Powder, Smoked Paprika and Cumin, in equal amounts. The MSG isn’t needed for home use, just spice the cooked sauce to taste. In adding the Onion, Garlic Powder, and Spices, you simply want to do your best to match the flavor of the sauce from your favorite restaurant. There’s no real recipe here, every restaurant or chain prepares theirs differently. 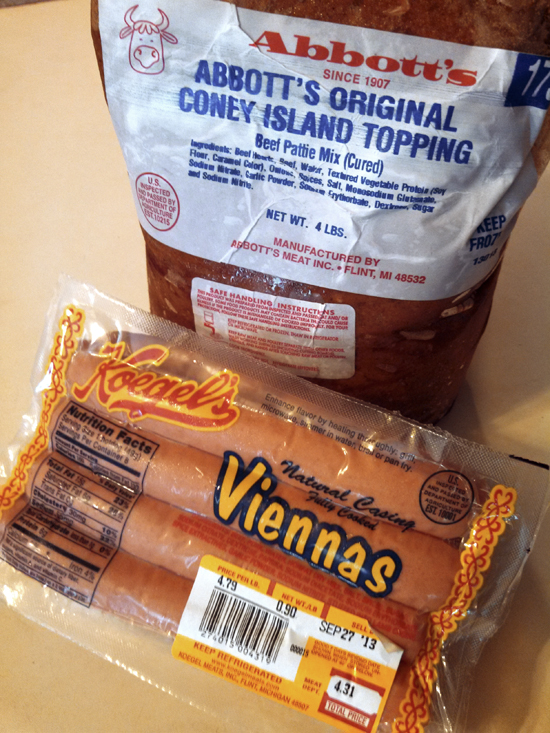 The Abbott’s Coney Sauce described below and shown in these photos, available in 4# and 10# bags, is a very recent development, and most restaurants don’t use it.

Some restaurants that serve the Flint Coney are decidedly more popular than others. Certain Flint Coney restaurants might also have a group of local followers, or might be on an interstate or tourist travel route with visitors from out-of-town viewing it as a “destination”. Ask anyone who’s been through town, grown up there recently, or seen recent news reports where to get a real Flint Coney and they’ll likely mention Starlite or Angelo’s.

Many people are also insistent that the restaurants serve the Koegel Vienna. The reality though is that they serve the Koegel’s Coney Frank, which is a variation of the Vienna. From Koegel’s own web site:

Coneys … Description: This is a blend of pork, beef and our unique spices stuffed into a natural casing and then smoked using natural hardwoods. We change the ingredients just a little from our Viennas so that the product can be held on a grill for an extended period of time … Ingredients: Beef, Pork, Water, Salt, Spices, Sugar, Sodium Citrate, Dextrose, Sodium Diacetate, Nonfat Dry Milk, Sodium Eryhtorbate, Spice Extractives, Sodium Nitrite, Garlic, stuffed into lamb casing.

Simion Brayan was working on the Flint Coney in the early 1920s when he went to Albert Koegel for the sausage itself. The issue was that Brayan needed a hot dog that would last longer on a flattop grill throughout restaurant service. According to “Coney Detroit”, by Katherine Yung and Joe Grimm, to create the Coney Koegel’s removed the nonfat dry milk and sugars from the Vienna. In addition, “Two to Go: A Short History of Flint’s Coney Island Restaurants” from the Genesee County Historical Society also indicates they changed the proportion of ingredients so they contained more fat pork than beef, while making the Coney somewhat slimmer. There was no indicated change in the casing as they both use lamb.

In looking into these changes we picked up a 10lb box of Coney Franks at Abbott’s Meat, along with a package of Viennas at a grocery. Measuring the Viennas with an outside vernier caliper gave us a consistent 21mm diameter. The tare weight from the label from the grocer’s scale gave us a package weight of 0.85lb for eight Viennas, so the average weight per Vienna was 1.7oz. In the box of Coney Franks different ones measured between 18mm and 21mm. One near the top of the box was misshapen, and was 18mm on one end and 22.5mm on the other end. So it seems they’re using a 20 – 22mm casing for the Coney Frank vs 22mm – 24mm for the Vienna. There were also 90 Coney Franks in the 10lb box, so they average 1.78oz. What this indicates is a denser meat mixture for the slimmer Coney Frank.

What’s important is that no matter what changes cooks make in cooking their own sauce from scratch using the 25# bag of Abbott’s Meat’s sauce base, or whether or not they want to call themselves “original”, the sauce and Koegel’s Coney are the two basic components that have always defined the Flint Coney. Anything that’s termed a “Flint-style Coney” can always be traced back to those two truly original items.

After buying the franks and sauce, I first thaw them down before repackaging. I then repack the franks into quart freezer bags, eight franks to a bag. As the 10lb box is sold by weight, there are approximately 90 – 92 franks in each box, although that number will be higher or lower depending on the packer. That last bag will likely have a count other than eight franks. The sauce then also goes into quart freezer bags, 1lb per back. I then remove as much air as possible during closing before refreezing the bags.

Does thawing then refreezing cause differences in these products before a final thaw prior to use? There are likely some flavor and textural changes, but they’re honestly not noticable. As these products have been sold frozen for some time now, the thaw/freeze cycle is common usage among home cooks. I’ve not yet heard of any complaints about it.

The Abbott’s prepared sauce does need a bit of fat when cooking. I generally use a couple tablespoons lard for each lb of sauce, although a good white shortening would also be acceptable.

References mention earlier restaurants using tallow, the beef equivalent of lard, which makes sense as the sauce is made of beef. But tallow is more expensive than lard or shortening, and the latter two don’t change the flavor of the sauce too much anyway. Cook the sauce to at least a temperature of 160°F and then continue a slow simmer until it’s rendered to your desired constistency.